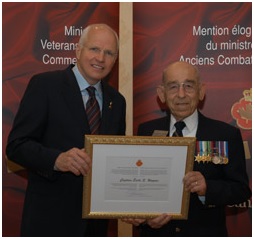 On December 25, 1923, Captain Earle Wagner was born in West La Have, Nova Scotia, where he also received his education later on in life.

At the young age of 17, he joined the Merchant Navy, and remained associated with the marine industry for over 48 years.

Captain Earle Wagner was an employee of the Imperial Oil Shipping Co. Ltd for over 17 years, and made it to Captain of Esso tankers (up to 18,000 D.W.T.).  He was also the Captain of the Landing Ship Tanks (LST), resupplying the D.E.W. (Distant Early Warning) Line  in the Western Arctic.

Captain Earle Wagner was a pilot and Port Warden at Churchill, Manitoba, and was a Superintendent at the Department of Fisheries and Oceans, Maritime Region, for over 24 years.

He initiated the Double – Crewing system for government vessels, now common practice in most ship operations, and the floater hose system for discharging petroleum products in the Western Artic, which reduced the size of the fleet.

In 1989, Captain Earle Wagner retired from the shipping industry, and became the National Chairman of the Canadian Merchant Navy Veterans Association Memorial Fund for over 13 years, and was also responsible for the National Merchant Navy Memorial, Sackville Landing, in the Halifax. In addition, he was the Chairman and Conductor for the Canadian/Norwegian Memorial Services in Halifax.

As a community volunteer for all of his adult life, Captain Earle Wagner established the Brian Earle Wagner Annual Memorial Award, at the J.L. Ilsley High School for graduating students in 1971.  He also founded the Ruth Louise Wagner Memorial Scholarship for Mental Research, at QE II Foundation, in Halifax.

Captain Earle Wagner was an active member of his local church, and was Property Chairman for over six years.  He was a student of the Seniors College Association of Nova Scotia for over seven years, and he participated in 32 Terry Fox Runs, and raised thousands of dollars for the Cancer Society.

Captain Earle Wagner was married to Ruth Nowe for 56 years (now deceased). He has four children: Susan, Brian (deceased), Barry and David, and has four grandchildren.