Messages from the Faith Community 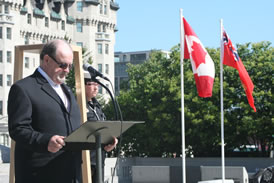 Since 2004, the Merchant Navy Veterans Day ceremonies, held at the National War Memorial in Ottawa, have been attended by military chaplains, and a representative from the Apostolic Nunciature in Canada, to conduct the opening prayer, the blessing, and to provide other related faith-based services.

Starting in 2005, the late Father Thomas Cassidy attended many of our national events on behalf of the Apostolic Nunciature, and he participated in our laying of wreaths ceremony, in memory of our Merchant Navy Veterans.

On 12 June 2015, our Chaplain, Rev. Dr. Brian Graham, sent a letter to the Holy See asking His Holiness Pope Francis for a special dedication of prayers on behalf of those members of the Merchant Navy who lost their lives in the service of their countries during World War II.

Please select:  Letter to the Holy See for further viewing.

On September 1, 2015, a letter was received from the Apostolic Nunciature announcing that His Holiness Pope Francis would include a special remembrance in his prayers for the souls of the men and women who lost their lives serving their countries in the Allied Merchant Navy.  In his historic address, Monseigneur Maurizzio Bravi, P.H., Chargé d’Affairs, from the Apostolic Nunciature, announced, in the name of the Holy Father, this special benediction:

“Approaching the day of the commemoration of the sacrifices of the Canadian Merchant Navy, in the name of the Holy Father, I wish to assure you and all the present members, of a special remembrance in his prayers for the souls of the men and women who lost their lives serving their countries in the Allied Merchant Navy during the Second World War.”

“Commemorating the 70th anniversary of that worldwide conflict, Pope Francis expressed the wish and the hope that the entire human family, learning from the tragedies of the past and faced with the current conflicts around the world "may persevere in the search for the common good and in promotion of a culture of peace" (General Audience - May 6, 2015).”

In his letter of introduction, the Rev. Dr. Brian Graham, MTh, DDiv, Principal Chaplain for the Allied Merchant Navy, provides a brief overview of how important chaplaincy is to the regular armed forces and merchant marine.

Please select Message from the Chaplain for more information.

The Merchant Navy Commemorative Theme Project (MNCTP) is committed to upholding long held military traditions in honoring Allied Merchant Navy and American Merchant Marine Veterans. We have always been proud to have our military chaplains attend our remembrance ceremonies, and we will always ensure that our observances remain sacrosanct. 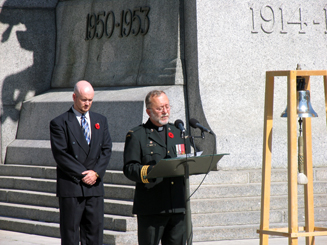 (From left: Military Chaplain Padré Monpas and a Royal Canadian Navy Officer at the 2010 Merchant Navy Veterans Day of Remembrance ceremony, held at the National War Memorial in Ottawa)

“We must never forget that the peace that we enjoy around us today is the result of their supreme sacrifice.”

ETERNAL FATHER, STRONG TO SAVE,
WHOSE ARM HATH BOUND THE RESTLESS WAVE,
WHO BIDD'ST THE MIGHTY OCEAN DEEP
ITS OWN APPOINTED LIMITS KEEP,
O HEAR US WHEN WE CRY TO THEE
FOR THOSE IN PERIL ON THE SEA!

O CHRIST! WHOSE VOICE THE WATERS HEARD
AND HUSHED THEIR RAGING AT THY WORD,
WHO WALKEDST ON THE FOAMING DEEP,
AND CALM AMIDST ITS RAGE DIDST SLEEP,
O HEAR US WHEN WE CRY TO THEE,
FOR THOSE IN PERIL ON THE SEA!

MOST HOLY SPIRIT! WHO DIDST BROOD
UPON THE CHAOS DARK AND RUDE,
AND BID ITS ANGRY TUMULT CEASE,
AND GIVE, FOR WILD CONFUSION, PEACE,
O HEAR US WHEN WE CRY TO THEE
FOR THOSE IN PERIL ON THE SEA!

ETERNAL FATHER, GRANT, WE PRAY,
TO ALL MARINES, BOTH NIGHT AND DAY,
THE COURAGE, HONOR, STRENGTH, AND SKILL
THEIR LAND TO SERVE, THY LAW FULFILL;
BE THOU THE SHIELD FOREVERMORE
FROM EVERY PERIL TO THE CORPS.

LORD, GUARD AND GUIDE THE ONES WHO FLY
THROUGH THE GREAT SPACES IN THE SKY.
BE WITH THEM ALWAYS IN THE AIR,
IN DARKENING STORMS OR SUNLIGHT FAIR. 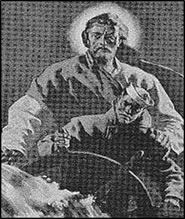