100th Anniversary of the Battle of Moreuil Wood 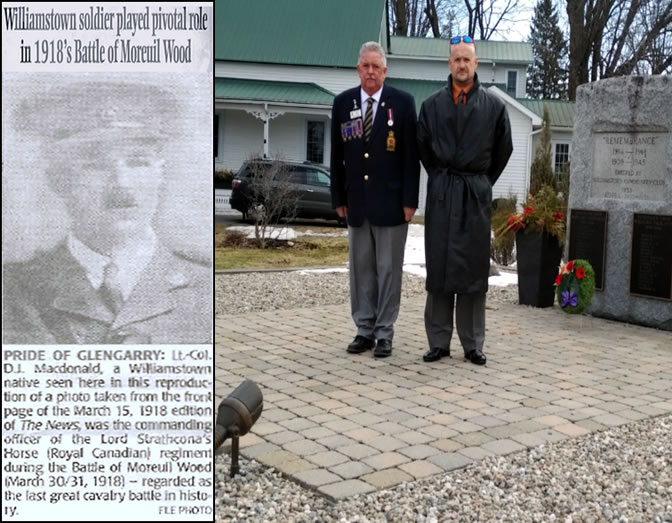 The Battle of Moreuil Wood was part of the wider Allied effort to stem the German Offensive (Operation Michael) in the spring of 1918, within the area of Amiens, France. Lord Strathcona’s Horse (Royal Canadians) was part of the Canadian Cavalry Brigade that encountered and defeated a large German force of magnitude four, at Moreuil Wood, on March 30, 1918. This was to be the last great cavalry charge in Canadian military history, and among the last of such actions in British and Commonwealth warfare.

Lt.–Col. D.J. Macdonald (from Williamstown, Ontario) and Pte. Albert Dale (from the Town of Alexandria, Ontario, and a native of Essex England) both fought valiantly in this epic battle for freedom.

“This is critical to us as Canadians to remember our past, to celebrate our achievements that were hard earned and to never forget those who made the ultimate sacrifice so that we could have the peace and security we have today.”

“It is extremely important that we reflect on and commemorate this important milestone in the history of the Strathconas. Those young troopers summoned tremendous courage as metal clashed and they confronted their enemy in hand-to-hand combat. Their valour continues to inspire us today as we enhance the resilience and warrior ethos of our soldiers, and as we prepare for operations in other theatres.”

“Branch 544 is proud to recognize the 100th Anniversary of the Battle of Moreuil Wood, and in commemorating the heroic efforts of Glengarrians Lt.–Col D.J. Macdonald and Pte. Albert Dale.”

“Honoring our veterans ‘past–and–present’ and learning the true price that is paid for our freedom enhances our understanding of the world as it is today, and enables the planning for a better tomorrow.

“As 2018 marks the centenary of the First World War’s final year, the MNCTP and her partners will be commemorating an array of special 100th Anniversary events. Also, as a former resident of historic rich Williamstown, I wanted to take this opportunity to remember our own.”