The MNCTP pays tribute to the thousands of Merchant Navy Veterans that served during the First and Second World War and just as importantly, it educates Canadians about their countries historical contributions internationally. These stories will be crafted to generate a sense of national identity through our common history.

Unquestionably, we must never forget the words of a great soldier:

“…To you from failing hands we throw
The torch, be yours to hold it high.
If ye break faith with us who die
We shall not sleep, though poppies grow
In Flanders fields.”

Through a number of inter-related themes, special events and educational products we will let Canadians and indeed the world know of the contributions made by the Merchant Navy that helped the Allied Forces to victory. 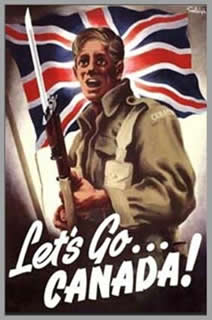 Other important factors for consideration are:

Today, the typical age of our Merchant Seaman is mid-to-late 80s and 90s, and their attrition rate is very high. Paying fair tribute to the tens of thousands of Merchant Navy Veterans that served during both World Wars compels us to educate Canadians about their countries historical contributions at home and internationally, with particular focus on our youth.

With the on-going threat of their amazing tales of sacrifice, courage, risk, and adventure being lost to future generations, we wish to ensure that these memories will not be forgotten and are properly preserved.

This project supports the priorities of the Government of Canada and in particular the mandate of Veterans Affairs Canada in respect to building a unified national perception of our history.

For over half-a-century, the valiant stories of our seafarers and the price they paid for our freedom were not remembered or honoured during the regular Veterans remembrance ceremonies.

While the regular Army, Navy, and Air Force personnel were recognized for their contributions and sacrifices, the Merchant Navy seaman were nowhere to be found.

As the ‘Fourth Arm’ of the Canadian Forces, this project promotes their heroism, and helps to establish an equal footing with their regular armed forces brethren.

The passing of Bill C-411, An Act to establish Merchant Navy Veterans Day, establishing September 3rd as the official day of remembrance, provided an historical precedent whereby every year we continue to recognize them - the leadership roles of Canadian Parliamentarians paved the way, and we persist with our responsibility to build on this foundation.

Furthermore, many people are not aware of the history of the Canadian and Allied Merchant Navies, and the MNCTP is providing multiple avenues to foster this much-needed awareness.