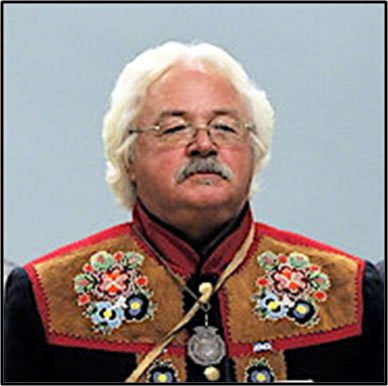 Identifying proudly with his Métis heritage, Mr. Aubin’s family are descendants of the Maliseet and Huron Wendat Nations from eastern Canada. They intermarried with French and Scottish new comers. Originating from the shores of the St. John River in New Brunswick, the Aubin family settled in the early 1800s in an Indian reserve at Île Verte, Québec, located in the lower St-Lawrence area. However, the Aubin family relocated on the shores of the St-Lawrence River, and finally settled in St-Flavie, Québec, after the surrender of the Indian reserve in 1869.

In 1987, after 107 years of dormancy, Mr. Aubin decided that he wanted to reorganize the community of his father, and to reunite the Maliseet of Québec under one nation. Thus, he ran, and was elected Chief of the Maliseet of Viger First Nation for one term. He became the First Métis in Québec to be elected as one of the Chief’s of a First Nation. During his term, he wrote the first Approved Citizenship Code of the Maliseet Nation of Viger, on June 27, 1987. This became the first Citizenship Code to be used by a First Nation in Canada.

Mr. Aubtin also petitioned the Government of Québec to include the Maliseet Nation in Bill 50, which now recognizes the Malisset Nation in the Province of Québec. Upon the completion of this mandate, he decided to return to his original Métis roots and organize (for the first time in the history of the Métis movement), the Métis Nation Québec.

In 1991, under the Meech Lake Accord consultations, Mr. Aubin was nominated as the Métis Commissioner for the province of Québec. In 1993, he wrote the paper to be presented to the Royal Commission on Aboriginal Peoples by the Métis Nation Québec. 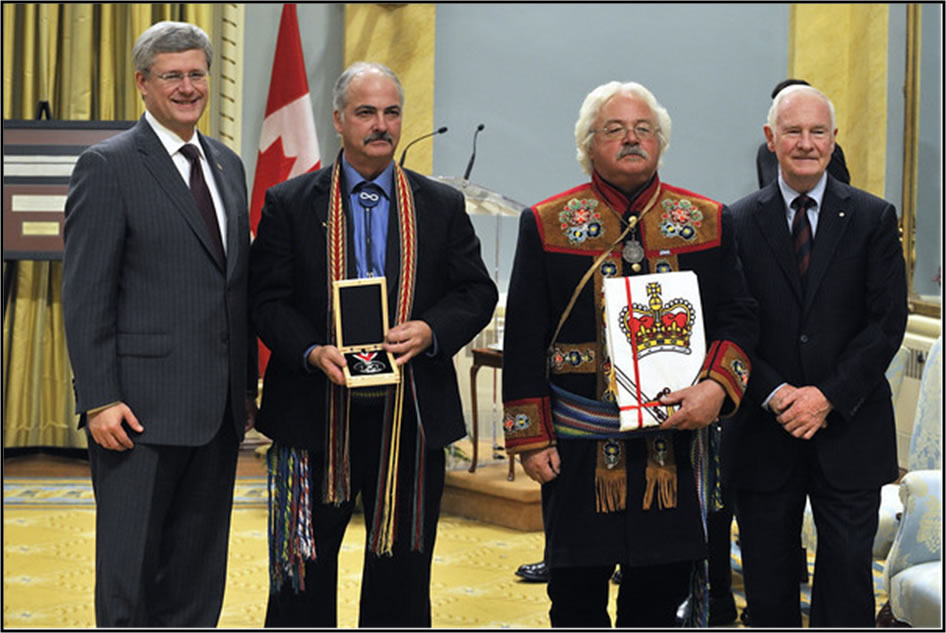 In 2012, the Government of Canada recognised a heritage link with the Métis family clans of Québec for their various contributions to the War of 1812. On behalf of the Québec Métis people, Mr. Aubin, along with Mr. Michel Lefebvre, accepted the War of 1812 Medal of Recognition and a Flag for the Métis participation in this great war from the Right Honourable Stephen Harper, Prime Minister of Canada, and His Excellency The Right Honourable David Johnston, Governor General of Canada.

Mr. Aubin comes from a long line of proud Aboriginal military leaders, signatories of the Wabanaki Treaties (in eastern Canada with the French and British crowns), and also veterans of both World Wars. He is also the keeper of the treaty box and the sacred pipe of the Great Peace of Montréal that took place in 1701.

Earlier in life, Mr. Aubin attended the St. Joseph College in Memramcook, and the University of Moncton, in New Brunswick, where he graduated in 1971.

He then went on to undertake a Post Graduate Education Degree at Simon Fraser University, in British Columbia. In 1974, Mr. Aubin moved to Winnipeg, where he created the Project Adventure Winnipeg (a community based diversion program for troubled youth located in the core area of Winnipeg).

In 1982, he moved to Aylmer, Québec, where he accepted the role of Executive Director of a Québec Aboriginal organization that provided services to Métis and Non-Status Indians. He finished his career with the department of Indian and Northern Affairs, when he retired in 2003.

Mr. Aubin is now working on re-establishing the Wabanaki Confederacy, and other projects, such as writing articles on Métis issues. Mr. Aubin is also recognized as a traditional teacher and as a spiritual Elder responsible for Wabanaki ceremonies. His goals are to educate Canadians and other Aboriginal peoples about the Métis Nation Québec, and the new role the Métis People are playing within Québec, Canada, and the World.

Samples of his political, social, cultural and spiritual writings can be found in French and in English on his Web site at www.claudeaubinmetis.com.

Claude has a wife by the name of June and two children, Anik and Sébastien, and two grandchildren, Kristopher and Émanuelle.