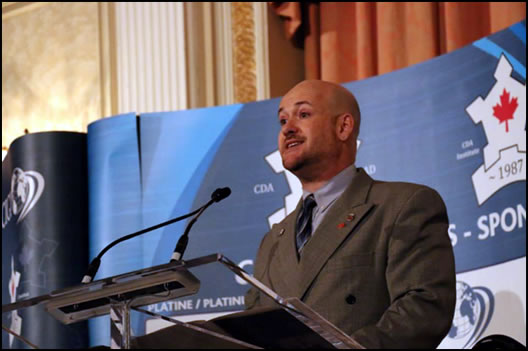 Visionary, strategist, advocate, Mr. Stéphane Ouellette founded the Merchant Navy Commemorative Theme Project (MNCTP) in 2004.  The MNCTP was founded to honour Allied Merchant Navy and American Merchant Marine Veterans, to recognize their sacrifices and contributions to our freedom, and safeguard its historical integration into the national and international mosaics of heritage and culture.

Since 2004, Mr. Ouellette has planned and organized the Merchant Navy Veterans Day of Remembrance that takes place on-or-around September 3, at the National War Memorial, in Ottawa, Ontario, Canada.

Mr. Ouellette has also founded and presided over two non-for-profit organizations: The Sydney Harbour Fortifications Society, and the Chapel Point Society. The mandate of these two organizations was to preserve the coastal defence network of WWII Sydney Harbour Fortifications, in Sydney, Cape Breton, Nova Scotia, as part of a multi-million dollar infrastructure development initiative.

Mr. Ouellette is also a Senior Executive/Consultant with over 20 years of experience in the areas of Strategic Management and Communications, National and International Promotions, and Public Relations.

During this time, Mr. Ouellette has successfully supported and obtained collaboration from a wide spectrum of stakeholders/stakeholder groups.  They are: Parliamentarians, such as The Right Honourable Justin Trudeau, The Right Honourable Stephen Harper, and The Honourable Thomas Mulcair, The Honourable Senator Joseph A. Day, and other political leaders at the provincial and municipal levels; departments and agencies, such as the Department of National Defence, Veterans Affairs Canada, Canadian Heritage, Transport Canada, Department of Fisheries and Oceans, and more;  and embassies and high commissions, such as The Embassy of the United States of America, The British High Commission, Embassy of The Kingdom of the Netherlands, The Apostolic Nunciature in Canada, and more; and not-for-profit and private sector organizations, the media, and more.

In November 2015, Mr. Ouellette was appointed to the National Board of Directors for Wreaths Across Canada (WAC).  WAC is a non-profit organization dedicated to honoring over 225,000 deceased members of the Canadian Armed Forces that are buried in cemeteries across Canada.

Mr. Ouellette is honoured to be: an Associate Member Association of the Conference of Defence Associations and the CDA Institute; an Honorary Patron of the Never Forgotten National Monument Foundation; and a member of the Royal Canadian Legion, Montgomery Branch, located in Ottawa, Ontario.

Mr. Ouellette resides in Ottawa, and has a son named Luke.