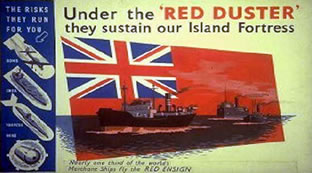 During the Second World War, the losses of the Merchant Navy were 1 in 8. Out of the 12, 000 WWII Merchant Navy Veterans, there are only (approximately) 1,200 that remain, with an average attrition level of 12 per month.

Although they were the mainstay of the Allied Forces victory in 1945, very little is sadly known of their sacrifices and losses to this very day.

In the post-war era, Merchant Navy Veterans struggled for more than half-a-century to achieve a modicum of what the regular forces personnel received after the war and up to this very present day.

For these reasons and many more, it is time to ensure that we demonstrate in a time-critical fashion our appreciation to the remaining Merchant Navy Veterans and their families. We will accomplish this by preserving the stories of our Merchant Navy heroes their legacy is our freedom the Passing of the Torch is everybodys responsibility.

“One of the main purposes of our organization has been to tell the Merchant Navy story and many of our members have been active in their own communities doing just that. Age and illness are taking their toll and many are no longer able to take such an active role. Yet it remains essential that the Canadian public be made aware of the contributions of the ‘Fourth Arm of the Services.’ Your initiative will certainly help to ensure that their sacrifices are not forgotten.”

As part of the MNCTP mandate, we recognize the need to demonstrate that these many dark events of war were overcome in the unified spirit of freedom.

The victory over the oppressing forces of liberty resulted from the contributions and sacrifices of many different groups (Army, Navy, Air Force, Merchant Navy, woman factory workers, and much more) that fought together, not in isolation. However, more than sixty years later, some of these groups still remain virtually unknown today, and that is the case for the Canadian and Allied Merchant Navies.